Diabetes isn’t a choice, but we can all choose to fight it. Your gift makes a difference and will go a long way to support research for a cure and better treatments as well as to raise awareness about the #EverydayReality of living with this disease. Let’s beat it together! Donate today

Other Ways to Donate:

Nearly 30 million battle diabetes and every 23 seconds someone new is diagnosed. Diabetes causes more deaths a year than breast cancer and AIDS combined. Your gift today will help us get closer to curing diabetes and better treatments for those living with diabetes.

Other Ways to Give

Adhesive capsulitis is more commonly known as frozen shoulder, and with good reason: It can render your shoulder so stiff, it's almost impossible to button your shirt — that is, if you aren't in too much pain to get dressed in the first place.

In general, frozen shoulder can come on after an injury to your shoulder or a bout with another musculo-skeletal condition such as tendinitis or bursitis. It can also develop after a stroke. Quite often its cause can't be pinpointed. Nonetheless, any condition that causes you to refrain from moving your arm and using your shoulder joint can put you at risk for developing frozen shoulder.

Frozen shoulder affects 10-20 percent of people with diabetes according to the American Academy of Orthopaedic Surgeons. Women are more likely to develop frozen shoulder than men and it occurs most frequently in people between the ages of 40 and 60.

Treatment of frozen shoulder focuses on controlling pain and getting movement back to normal through physical therapy. Sometimes surgery is also considered. Talk to your doctor about treatment options that are right for you. 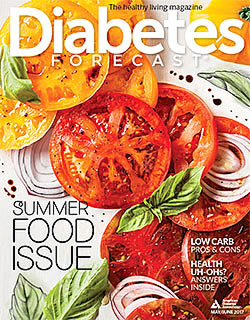 Give hope to millions with diabetes wishing for cure.